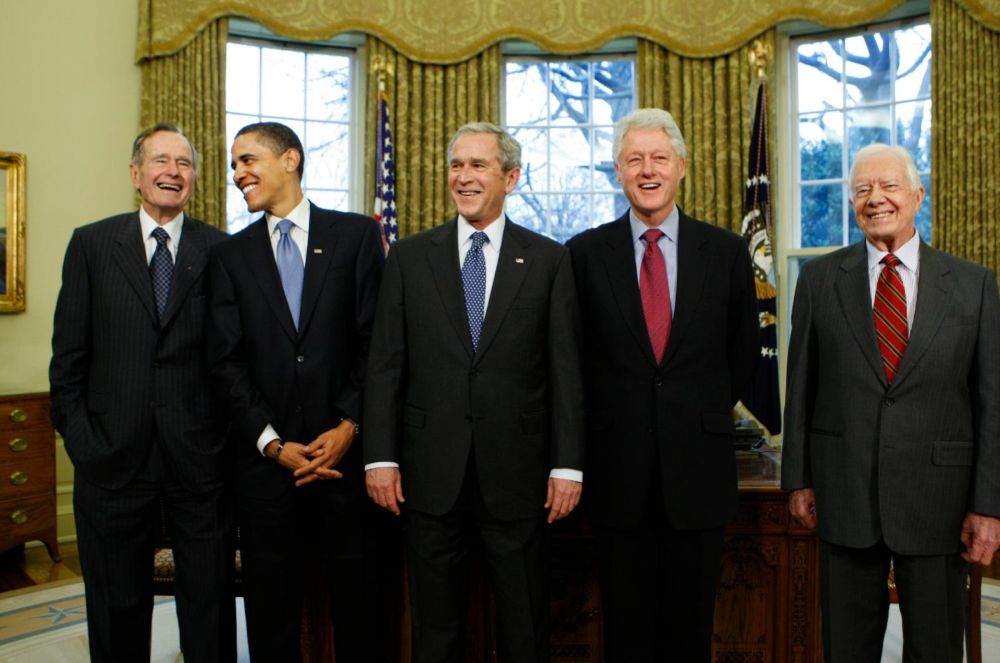 As of now, there are six living presidents, including the oldest president ever elected, Joseph R. Biden Jr.

In addition to Donald Trump, Barack Obama, George W. Bush, Bill Clinton, and Jimmy Carter, five other Americans have served as president. Over the course of their White House careers, they have served in the White House for more than four decades.

At one time, there were six living presidents and former presidents. Only two such moments in modern history occurred before Joe Biden’s inauguration: 2017 and most of 2018 when the above presidents and George H.W. were alive during the first two years of the Trump presidency, and between 2001 and 2004 when both Ronald Reagan and Gerald Ford were still alive during the George W. Bush presidency.

Only Clinton and Obama entered the office in their 40s of the five living presidents. In their 50s, Carter and the younger Bush entered the White House. Trump was 70 when he became president in January 2017, and Biden was 78 when he began his term in 2021.

In November 2018, the elder Bush died at the age of 94, the last time a former president died.

The 6 Living US Presidents

The former vice president of Barack Obama from 2009 to 2017 won the 2020 presidential election, defeating incumbent Donald Trump. Upon his election in November 2020, Biden was 77 years old, and he turned 78 between then and his inauguration, becoming the oldest president ever elected.

Donald Trump, a Republican, is serving his first term as president. In 2016, he defeated Democrat Hillary Clinton in what was widely viewed as an upset victory.

A 70-year-old Trump became the oldest person to hold the highest office in the land upon his inauguration. Ronald Reagan, who became president in 1981 at the age of 69, was the second-oldest president.

Each of Trump’s living predecessors has criticised him at one time or another for his policies and “un-presidential” behavior.

In the White House, Barack Obama served two terms as a Democrat from Illinois. His first election was in 2008, and he was re-elected in 2012. At the age of 47, Obama was inaugurated as president. Eight years later, in 2017, he left office at the age of 55.

The 43rd president of the United States was George W. Bush, a Republican from Texas. Bush is a member of the Bush political dynasty. Bush was born in New Haven, Connecticut, on July 6, 1946. In 2001, he was 54 years old when he was sworn in for his first of two terms as president. Eight years later, in 2009, he left office at the age of 62.

The 42nd president of the United States was Bill Clinton, a Democrat from Arkansas. Clinton was born in Hope, Arkansas, on Aug. 19, 1946. In 1993, he took the oath of office for his first of two terms in the White House at the age of 46. In 2001, Clinton was 54 years old when his second term expired.

Carter, a Democrat from Georgia, served as the 39th president of the United States and is the oldest living president. Carter was born in Plains, Georgia, on October 1, 1924. He was 52 years old when he took office in 1977, and 56 years old when he left the White House in 1981.

Carter was diagnosed with liver and brain cancer in 2015, when he was 90 years old. Initially, he thought he had only weeks to live. In an interview with reporters that year, he said:

A wonderful life has been had by me. I am ready for anything, and I am looking forward to new adventures. I place my faith in God.”