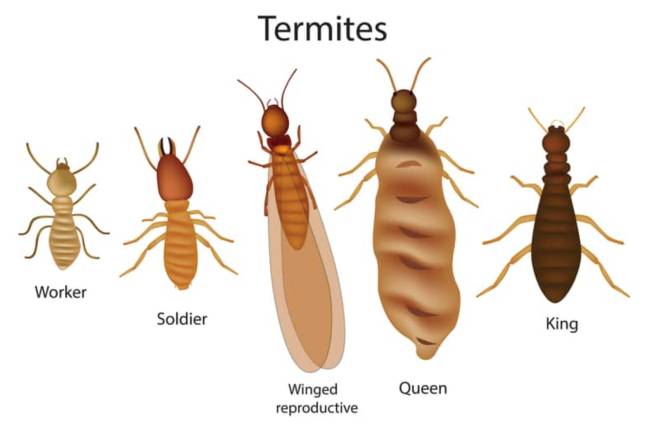 The 2,200 or so species of termites living in the tropics have been munching away on wood for more than 250 million years, long before humans built their homes from wood.

By feeding on cellulose, the main component of plants’ cell walls, termites recycle wood products into the soil. Most termite damage is caused by subterranean (underground) termites, members of the Rhinotermitidae family. The most common ground-dwelling termites are the eastern, western, and Formosan subterranean termites, which will happily eat the house’s framing, starting at the bottom where moisture has made the wood soft, and moving upward.

Drywood termites (Kalotermitidae) and damp-wood termites (Termopsidae) also cause structural damage. Damp-wood termites prefer basements, bathrooms, and other places where water leaks are likely to occur. Drywood termites enter at the roofline. The first thing you should do if you suspect you have a termite problem is to confirm that the pests are indeed termites. What do termites look like?

Due to their similar appearance, winged ants are often confused with termites. To tell them apart, follow these steps:

Subterranean termites live in moist, dark environments. They eat structural wood, eating out the cores of beams and leaving thin shells behind. This makes these termites hard to detect, and by the time homeowners notice an infestation, the damage has already been done.

Formosan subterranean termite soldier measuring about 1/2 inch long. In addition to its dark head and oval shape, it has a rounded abdomen, a thick waist, straight antennae, and no eyes. Formosan soldiers have powerful jaws to defend their colonies, just as eastern subterranean soldiers do.

In the southeastern United States, California, and Hawaii, Formosan termites are one of the most destructive termite species, causing millions of dollars of structural damage each year. Their ability to multiply and destroy wood structures is faster than that of other native subterranean species. Although they don’t actually eat faster than other termites, their nests are enormous and can contain millions of them.

The colonies of subterranean termites are larger than those of drywood termites. Since they nest and feed in dry, sound wood, wood-frame homes are especially vulnerable to them. Termites consume structural wood from the inside out, leaving behind a brittle shell. They don’t require damp conditions to survive, unlike some other types of termites. From California to North Carolina, drywood termites are found in the southern half of the United States. Most of them measure between 1/4 and 3/8 inches long.

Reproductive termites, called alates, look quite different from workers or soldiers. The reproductives have one pair of wings that are almost equal in length, which lie flat against the termite’s back when it is resting. Alates have compound eyes, which are functional, and their bodies are darker than soldiers or workers.

The bodies of reproductive termites and reproductive ants, which also have wings, can be distinguished by looking at them. Alates of termites have straight antennae, rounded abdomens, and thick waists, whereas ants have elbowed antennae, pronounced waistlines, and slightly pointed abdomens.

Between February and April, eastern subterranean termites usually swarm during the day. Winged queens and kings emerge en masse, ready to mate and begin new colonies. They have dark brown or black bodies. There is probably already an infestation of termites in your home if you see winged termites inside it.

Formosan termites swarm between dusk and midnight, unlike native subterranean termites that swarm during the day. In addition, they swarm later in the season than most other termites, usually between April and June.

Formosan alates are lighter in color than eastern subterranean reproductives shown in the previous image. Their bodies are yellowish-brown and their wings are smoky in color. The size of Formosan termites is also noticeably larger than that of native termites.

Termite queens look quite different from workers and soldiers. In fact, she hardly resembles an insect at all due to her expansive stomach full of eggs. There is a physogastric stomach in termite queens. Her egg-laying capacity increases as she ages due to the expansion of this internal membrane. Termite queens can lay hundreds or even thousands of eggs a day, depending on their species. The lives of termite queens are extraordinarily long. It’s not uncommon for people to live 15 to 30 years or longer.

Termites can cause extensive damage to walls and floors without being detected. Since termites eat wood from the inside out, you probably won’t notice them until your house is infested, and you’re more likely to see signs of damage than the bugs. Keep an eye out for:

In areas where termite infestations are common, it’s important to check your home regularly for termites (or have it inspected by a professional). Termites can cause costly home repairs if they are not caught early. Termites can be treated yourself or by local pest control professionals if you find signs of an infestation. In order to get rid of termites yourself, you’ll need to locate the site where they’re feeding (the “termite gallery”) and apply insecticide aggressively. Additionally, you’ll need to place baiting stations or treat the soil to kill the remaining insects.

The best way to prevent termite infestations is to prevent them in the first place. An insecticide can be sprayed into the ground to repel them and a trench can be dug to prevent the infestation. The process is labor-intensive but can last for five to ten years if left undisturbed. In spite of the fact that bait stations don’t require a lot of labor, they must be checked every few months. Dig them down 8 to 10 inches and place them at intervals of 8 to 10 feet. The bait stations are first loaded with “prebait.” Once termite activity is confirmed, the poisonous bait is added. The poisoned bait is brought back to the nest by the termites and kills the entire colony.