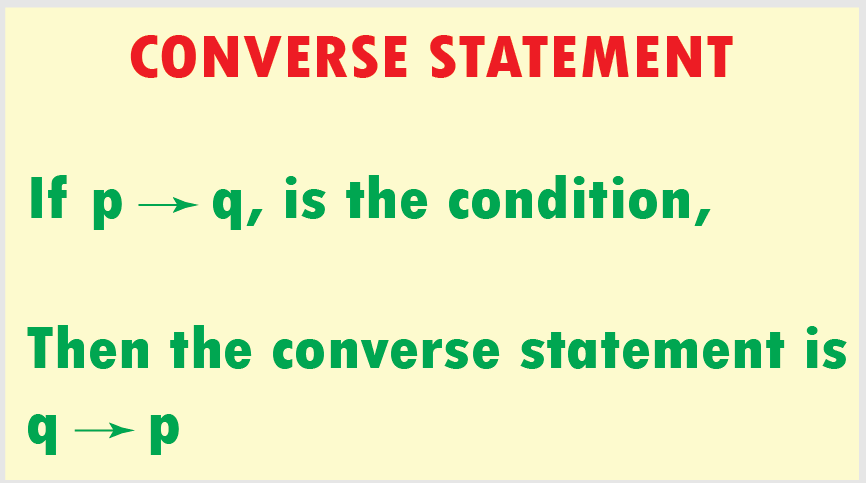 The three most common ways to change a conditional statement are by taking its inverse, its converse statement, or its contrapositive. In each case, either the hypothesis or the conclusion swap places, or a statement is replaced by its negation.

It is not possible to determine the true inverse of a statement. The inverse of some statements may have the same truth value as the inverse of another statement and vice versa. The statement “A four-sided polygon is a quadrilateral” and its inverse, “A polygon with more or fewer sides than four sides is not a quadrilateral,” are both true (the truth value of each is T). The original statement and its inverse, however, are not equally true in the inscribed angles example above. It is true that an angle with its vertex on a circle will not be an inscribed angle, but the converse is false: it is possible for an angle with its vertex on a circle to still not be an inscribed angle.

A statement’s converse may or may not have the same meaning as its original. A tiger is a mammal, for instance, so the converse would be a mammal is a tiger. That’s certainly not the case.

What Is A Converse Statement?

A converse statement is obtained by reversing the hypothesis and conclusion of a conditional statement.

Understanding “hypothesis” and “conclusion” is important.

What is the negation of the statement?

If something is negated, it means it conveys the opposite of that thing.

How do you write a converse statement?

Converse is a statement derived by reversing a statement’s hypothesis and conclusion.