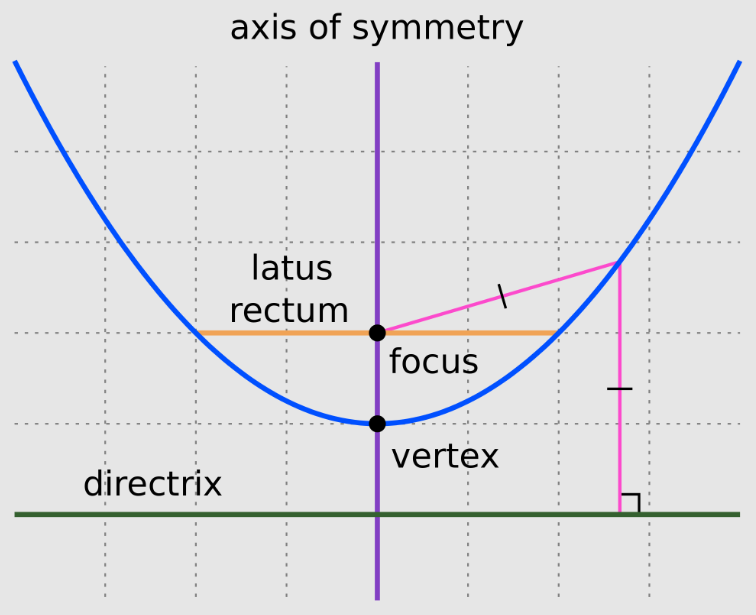 Parabolas are graphs of quadratic functions in mathematics. A parabola is a projective curve of a circle, according to Pascal. Galileo described a path called a parabolic path that is followed by projectiles falling under uniform gravity. In most cases, physical motions of bodies follow a curvilinear path in the shape of a parabola.

Parabolas are plane curves with mirror-symmetry and usually a U-shaped shape. In this chapter, we will trace the development of the standard formula for parabolas, demonstrate the various standard forms, and explain what properties a parabola has.

In addition, it is important to note that the fixed point does not lie on the fixed line. Parabolas are loci of points that are equidistant from a given point (focus) and a given line (directrix). Parabolic curves are critical curves of the coordinate geometry.

To understand some of the parts and features of a parabola, you should know the following terms.

Standard Equations of a Parabola

The following observations can be made from the standard form of equations:

In a plane, the Parabola Formula represents the general form of a parabolic path. The following are the formulas used to find the parameters of a parabola.

Graph of a Parabola

a is positive, which opens up the parabola.

Axis of symmetry is x =1

The parabola has coordinates (x, y) at point P. As per the definition of a parabola, the distance of this point from the focus F is equal to the length of this point P from the Directrix. For this calculation, we consider a point B on the directrix, and we use the perpendicular distance PB.

According to this definition of the eccentricity of the parabola, PF = PB (since e = PF/PB = 1)

X + a = 0 is the equation for the directtrix, and the perpendicular distance formula is used to find PB.

PF = PB must be used to derive the equation for parabola

Squaring the equation on both sides,

We have successfully derived a standard equation for the parabola.

In the same way, we can deduce the equations for parabolas as:

The above four equations are the Standard Equations of Parabolas.

Properties of a Parabola

Here we shall aim at understanding some of the essential properties and terms related to a parabola.

Pole and Polar: At the ends of the chords, draw an outside point of the parabola, the locus of the points of intersection of the tangents. The polar drawn from this point is the pole. Hence, the pole is the point to which the polar is referred. For a pole having the coordinates (x1,y1)(x1,y1), for a parabola y2 =4ax, the equation of the polar is yy1=2x(x+x1)yy1=2x(x+x1).

Parametric Coordinates: The parametric coordinates of a parabola equation are (at2, 2at). These coordinates represent all the points on the parabola.