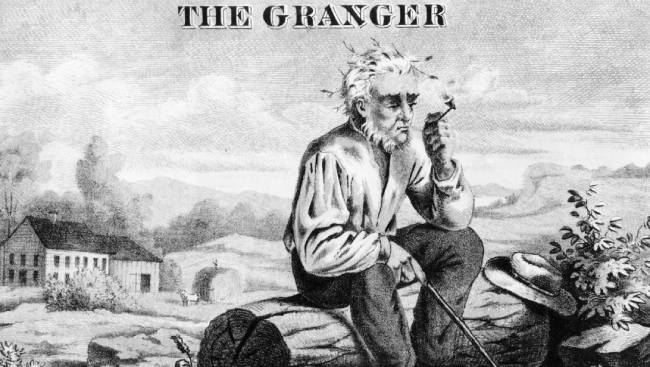 A group of laws known as the Granger laws were enacted by Minnesota, Iowa, Wisconsin, and Illinois in the late 1860s and early 1870s to regulate rapidly rising crop transport and storage fees. The Granger Movement, a group of farmers affiliated with the National Grange of the Order of Patrons of Husbandry, promoted passage of the Granger laws.

Because of their extreme aggravation of railroad monopolies, the Granger Laws led to several important Supreme Court cases, including Munn v. Illinois and Wabash v. Illinois. As a result of the National Grange organization, the legacy of the Granger Movement continues to live on today.

Historically, American leaders have placed great emphasis on farming through the Granger movement, the Granger Laws, and the modern Grange.

“So long as our governments are primarily agricultural, they will remain virtuous for many centuries.” – Thomas Jefferson

As in England, colonial Americans used the word “grange” to describe a farmhouse and its outbuildings. It is derived from the Latin word for grain, grānum. Farmers were often called “grangers” in the British Isles.

The Granger Movement: The Grange is Born

In the years following the American Civil War, the Granger movement was a coalition of American farmers mainly in Midwestern and Southern states.

It had not been kind to farmers during the Civil War. For those who had managed to buy land and machinery, they had incurred heavy debts. Privately owned and unregulated railroads had become regional monopolies. Due to this, railroads were free to charge farmers excessive fares to transport their crops. The war had left much of American agriculture in a state of disarray due to diminished incomes and human tragedies.

The President of the United States, Andrew Johnson, sent Oliver Hudson Kelley to assess the postwar state of agriculture in the South. In 1867, Kelley founded the National Grange of the Order of Patrons of Husbandry in hopes of uniting Southern and Northern farmers in a cooperative effort to modernize farming practices. The nation’s first Grange, Grange No. 1, was founded in Fredonia, New York, in 1868. Most states had at least one Grange by the mid-1870s, and nearly 800,000 members belonged to the Grange.

The early Grange was formed by farmers who were worried about losing profits because of the exorbitant fees charged by monopolistic railroads and grain elevators, often owned by the railroads, for transporting and storing their crops. Through the 1870s, the Grange became increasingly politically active as its membership and influence grew.

By building grain elevators, silos, and mills, the granges were able to reduce some of their costs. In order to cut transportation costs, however, rail conglomerates would have to be regulated through legislation known as the “Granger laws.”

As a result of intense lobbying efforts organized by local grain granges, Illinois enacted a law in 1871 that regulated railroads and grain storage companies by setting maximum rates they could charge farmers. Similar laws were soon passed in Minnesota, Wisconsin, and Iowa.

Railroads and grain storage companies sued the Granger laws, fearing a loss of profits and power. It was eventually the “Granger cases” that reached the High Court in 1877. As a result of these cases, legal precedents were set that changed the way businesses and industries operated in the adolescent country.

Munn and Scott, a Chicago-based grain storage company, was found guilty of violating the Illinois Granger law in 1877. Munn and Scott appealed the conviction, claiming the state’s Granger law constituted an unconstitutional seizure of their property without due process of law. In Munn v. Illinois, the Illinois Supreme Court upheld the Granger law and appealed to the U.S. Court of Appeals.

In a 7-2 decision by Chief Justice Morrison Remick Waite, the Supreme Court ruled that businesses serving the public interest, such as those that store or transport food crops, can be regulated. In his opinion, Justice Waite wrote that government regulation of private business is right and proper “when such regulation becomes necessary for the public good.” Through this ruling, Munn v. Illinois established an important precedent that laid the groundwork for modern federal regulatory procedures.

According to the Supreme Court, Illinois’ Granger law, as it applied to railroads, was unconstitutional because it aimed to control interstate commerce, a power reserved to the federal government by the Tenth Amendment.

The Interstate Commerce Act of 1887 was enacted in response to the Wabash Case. In addition to being subject to federal regulations, railroads were required to inform the federal government of their rates under the act. Furthermore, the act prohibited railroads from charging different haul rates based on distance.

As a means of enforcing the new regulations, the act also created the now-defunct Interstate Commerce Commission.

By far, Wisconsin’s “Potter Law” was the most radical of all Granger laws. Granger laws in Illinois, Iowa, and Minnesota assigned railroad fares and grain storage prices to independent administrative commissions, but Wisconsin’s Potter Law empowered the legislature itself to set them. Consequently, the railroads were allowed to make little if any profits through a state-sanctioned price-fixing system. Since new routes and extensions to existing tracks did not generate profits, railroads stopped building them. In 1867, Wisconsin’s economy went into a depression due to the lack of railroad construction, which forced the state legislature to repeal the Potter Law.

The National Grange remains an influential force in American agriculture and a vital part of community life today. In addition to advocating for farmers’ interests in global free trade and domestic farm policy, the Grange continues to do so today.’

To build stronger communities and states, as well as a stronger nation, the Grange offers fellowship, service, and legislation to provide individuals and families with opportunities to develop to their highest potential.

The Washington, D.C.-based Grange is a nonpartisan organization that supports only policies and legislation, not political parties or candidates. Originally founded to serve farmers and agricultural interests, the Grange now advocates for a wide variety of issues, and its membership is open to anyone. According to the Grange, its members come from small towns, large cities, farms, and penthouses.

In more than 2,100 communities in 36 states, local Grange Halls remain vital centers of rural life for many farming communities.