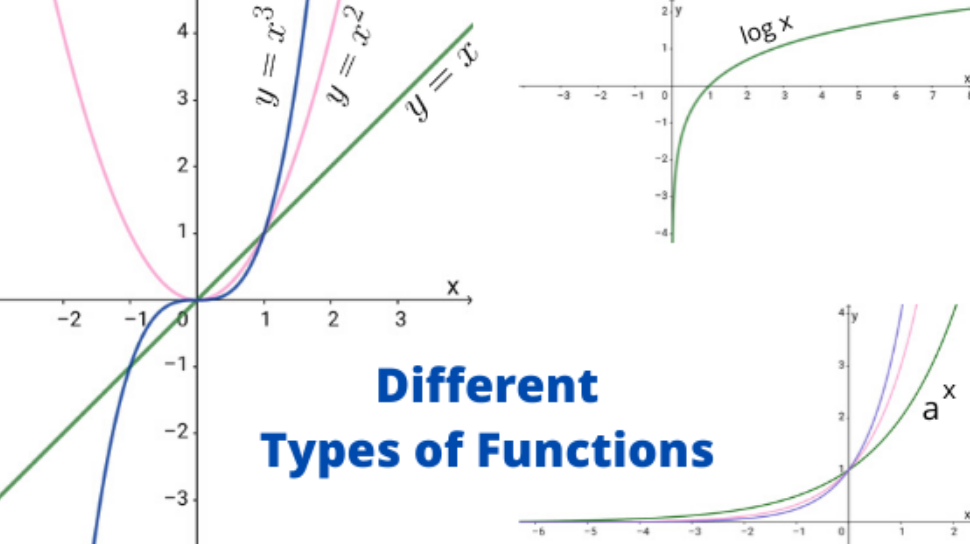 It is possible to represent any mathematical expression that has an input value and a result as a function. In this chapter, we will examine types of functions, their definitions, and examples.

What are the Different Types of Functions?

A function y = f(x) is classified into different types based on its domain and range, and its expression. Functions have a domain x value, which is their input. A domain value can be a number, angle, decimal, or fraction. Range is defined by the y value or the f(x) value, which is a numeric value. Functions can be divided into the following four types.

Venn Diagram: This is a popular format for representing functions. Venn diagrams are usually shown as two circles connected by arrows. Domain values are presented in one circle and range values in another. Functions define the arrows, and how the arrows connect the different elements in the two circles.

Roster Form: Domain and range are represented in flower brackets, with the first element of a pair representing the domain, and the second element representing the range. Let’s try to understand this with a simple example. For a function of the form f(x) = x2, the function is represented as {(1, 1), (2, 4), (3, 9), (4, 16)}. The first element is the domain or x value, while the second element is the range or f(x) value of the function.

Classification of Types of Functions

Types of Functions – Based on Set Elements

Functions of this type are classified based on the number of relationships between the elements in a domain and those in a codomain. Here are the different types of functions based on set elements.

Many to One Function

One One and Onto Function (Bijection)

The properties of an into function are exactly opposite those of an onto function. There are certain elements in the co-domain that do not have pre-images. Set B consists of excess elements that are not connected to any elements in set A.

Types of Function – Based on Equation

Let us understand each of these functions in detail.

Types of Functions – Based on Range

No matter what the sign of the input domain value is, modulus gives the absolute value of the function. The modulus function is represented as f(x) = |x|. The input value of ‘x’ can be a positive or a negative expression. Since the coordinates of the points on the graph are of the form (x, y), (-x, y), the graph of a modulus function lies in the first and second quadrants.

Even and Odd Function

If the same range appears for different domain values and sequentially, this is considered a periodic function. The trigonometric functions can also be considered periodic functions. For example, the function f(x) = Sinx, have a range equal to the range of [-1, 1] for the different domain values of x = nπ + (-1)nx. In a similar manner, we can write the domain and range of trigonometric functions and prove that the ranges occur in a periodic manner.

The greatest integer function is also referred to as the step function. In the greatest integer function, the number is rounded up to the nearest integer less than or equal to the given number. Input variable x can have any real value. But the output will always be an integer. All integers will also appear in the output set. Hence, the domain of this function will be real numbers R, while its range will be integers (Z).

Due to its step structure, the greatest integer function graph is referred to as the step curve. The greatest integral function is denoted as f(x) = ⌊x⌋. For a function taking values from [1, 2), the value of f(x) is 1.

Types of Functions – Based on Domain

What are the Various Forms of Representation of Functions?

What are the Types of Functions?


Functions can be broadly classified into four types.

How do you Determine the Types of Functions?

What Type of Function is Always Continuous?