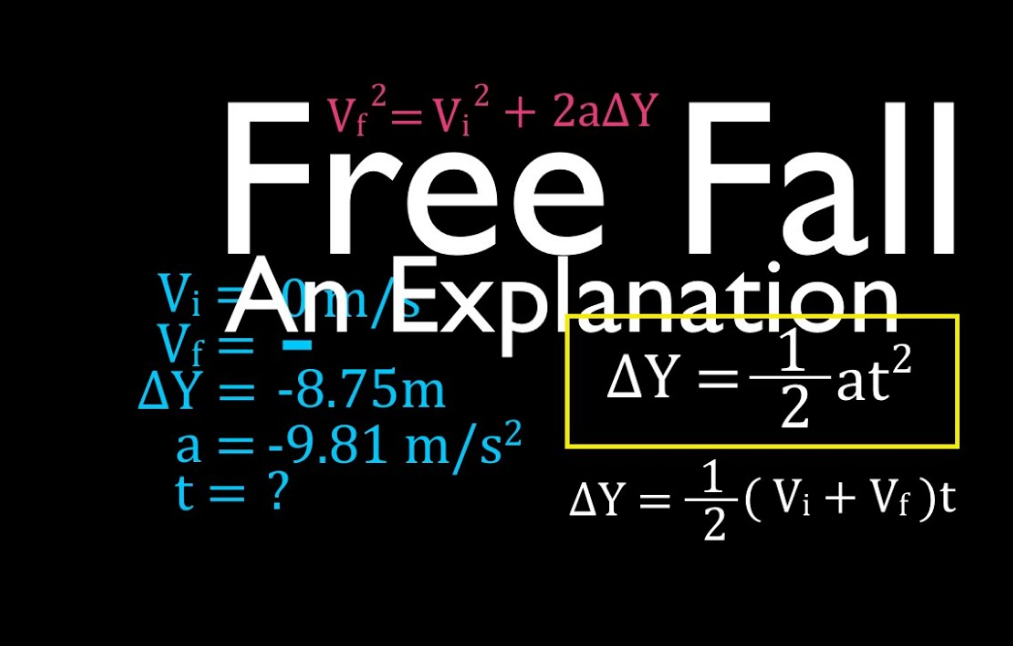 Free Fall Equation: Everyday life is filled with common motions such as free fall. When we drop something accidentally, we can observe its motion. The first part of its journey will be slow, and until the end, it gains speed, reaching its maximum speed just before colliding with another car.

There are many factors that affect the speed of an object during free fall. In this article, we discuss free fall motion and free fall formula with examples. Learn the concept!

In physics, freefall refers to a situation where gravity is the only force acting on an object, and so acceleration results. As its name suggests, freefall is the process of falling freely due to the pull of the earth’s gravity. This motion will have the effect of acceleration due to gravity. The motion will follow the three equations of motion under gravity.

Projectile motion is another important category of free-fall problems. Although these events unfold in the three-dimensional world, for basic physics purposes, they are considered as two-dimensional on paper.

The acceleration due to gravity has the unique but interesting property of being the same for all masses. Up until the days of Galileo Galilei, this was not a self-evident fact. As an object falls, gravity is not the only force acting on it, and air resistance tends to cause lighter objects to accelerate more slowly. It is something that we have all noticed when comparing the fall rate of a rock and a feather.

At the “leaning” Tower of Pisa, Galileo conducted these ingenious experiments and demonstrated the independence of gravitational acceleration from mass by dropping masses of different weights from the top.

Physics problems involving free-fall are usually based on the assumption of no air resistance. In reality, however, an object in free fall faces resistance from the Earth’s atmosphere. Additionally, particles in the air collide with the falling object, which results in some of its kinetic energy being transformed into thermal energy. The result is “less motion” or a decreasing downward velocity that is more gradual.

The formula for free fall

Imagine an object’s body is falling freely for time t seconds, with final velocity v, from a height h, due to gravity g. It follows the following equations of motion:

These equations can be derived from the usual equations of motion as given below, by substituting

We can see it as follows:

Freefall is the autonomous movement of the amassed body. In this case, it only depends upon the height from the surface and the duration for which the body is thrown. ody is thrown.

Example-1: Compute the height of the body if it has a mass of 2 Kg and touches the ground after 5 seconds?

We have to compute the height. So, we can apply the first equation as given above.

Therefore, the height as required will be 122.5 meters.

What is free fall explained with an example?

Free fall of a body is the motion of the body solely under the action of the gravitational force of the Earth. In an ideal case, a skydiver who jumps off an aircraft exhibits free fall and they only feel the force due to gravity. In practice, however, skydivers also experience air resistance and drag force as they travel through the atmosphere.

What is the formula for free fall?

When an object of mass m is in free fall, the only force acting on the object is gravity, which is the force exerted by Earth’s gravity.

The acceleration acting on the free-falling object is equal to the acceleration due to gravity, irrespective of the mass, size, or shape of the object.